Last year, I wrote a "Tombtone Tuesday" post about the uncle I have never met, after I discovered a picture of his headstone on Flickr.

A couple of months ago, my cousin Mary, sent me a document she found amongst her parents papers. Her father Jim, was George and my father's brother.

Hsving written the review of the Anzac Blog Challenge on my work blog Kintalk, I decided to write an update post.

George died intestate, which is unusual in my experience for a serving man, being sent into action. 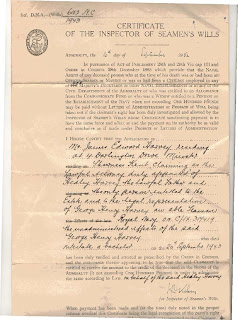 I hereby certify that the applicant of Mr James Edward HARVEY, residing at 4 Dorlington Drive, Minster, Sheerness, Kent, claiming as the lawful attorney, duly appointed of Hedley HARVEY, the lawful Father and the only person entitled to the Estate and to the legal representation of George Henry HARVEY an Able Seaman Royal Navy ON C/VX 314419 the unadministered effects of the said George Henry HARVEY who died intestate a bachelor on the 20th September 1943, has been duly verified and attested as proscribed by the ORDER in COUNCIL and the statements therein appearing to be true that the said CLAIMANT is entitled to receive the amount to the credit of the deceased in the BOOKS of the ADMIRALTY (it not exceeding ONE HUNDRED POUNDS) in order to administer the same according to LAW. On behalf of the said Hedley HARVEY. 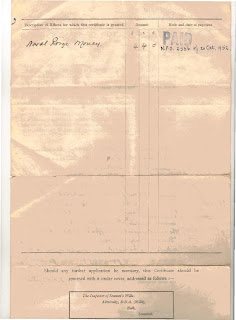 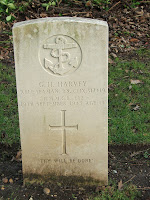 So my grandfather was paid the princely sum of £4 4s "prize money" for the loss of his son, and had to wait nine years before being granted it.

Seems a small amount of money, to be paid for your life. So sad.

Posted by genebrarian at 7:00 PM