Last year, I updated my original Tombstone Tuesday tribute post about my Uncle George after my cousin Mary sent me some further information.

Recently, a kindly researcher, Brian, found my blog, and sent me a photo of the machine gunboat that my Uncle was on when he was killed. On the back of the photo is a crew list, in the crewmen's own handwriting - which includes my Uncle George.

Can you imagine my delight?

I live in Southwest England, in a village called Galmpton near Brixham in Devon, a village on the banks of the River Dart which saw a lot of Naval and Military activity in the 2nd WW both in defence of the Country in the English Channel and particularly on the build up to D Day. This village like many others had/has boatyards which is where my contact with you has just materialised in some research. My village pub, The Manor Inn, has just come into possession of an old wartime photo of a HMMGB (with its ID number blanked out under wartime censorship) and a separate brass plate stating 612, HALLS, 1942 The HALLS are a well established local family who amongst other interests were owners of the boatyard down the road,It is widely known that this yard were building these vessels for the war effort (as were numerous others along the South Coast) I have just 'googled' HMMGB 612 and found your research. I have no idea as to the provenance of the photo (which appears to be a photo of a photo but is clearly a genuine photo of a MGB) or if the plaque actually belongs to it but I do know the fact is these boats were built in this village and the Hall family were boatyard owners - I'm 60 yrs old and know there are one or two older people in the village with a family history that will be able to recall the wartime years and Halls boatyard if not specific events about the vessels built. If you Google Earth us you will see the area and if I've got this right, the origins of the vessel 612 ! Let me know if I have contacted the right family and if I can help further.

After my grateful first response to him, Brian replied back:


I live on the River Dart in the village of Galmpton which two had boatyards assisting the war effort in assembling these vessels, the Dart itself was a major 'harbour' for naval vessels in the preparations and launch of Operation Overlord - the D Day landings but a less known operation was Tiger - a rehearsal for the invasion which ended in considerable loss of life when a German MTB came across the convoy training on Slapton Beach in Start Bay just a mile down the coast from Dartmouth, the disaster was kept secret for years and historians are still uncovering details - well worth a read given the history of your knowledge of these famous craft. Did I mention that one of the original Fairmile boats still works as a passenger ferry out of Dartmouth? 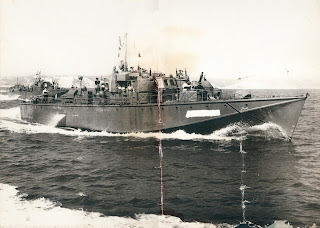 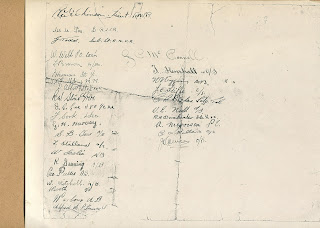 Since beginning my own research, I have been amazed at the kindness of fellow researchers.

My father and I would like to say a sincere thanks to Brian for making contact, and for allowing me to share this photo above, and excerpts from his emails.

Seonaid
Posted by genebrarian at 11:37 AM